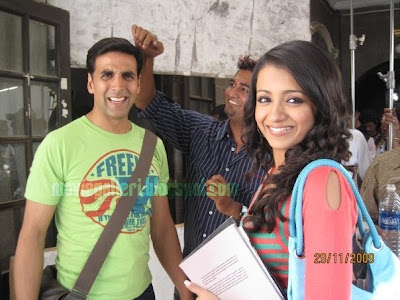 The music of the film is composed by Pritam. The film hits the screens on July 23, 2010. According to reports, the film is a satirical comedy on misuse on government funds by government contractors responsible for highway construction and repair in India. It is partly a reflection on the rampant use of fake material so that the contractor keeps making money by fixing the same stretches of roads over and over again.

As one presumed, Khatta Meetha has an instant coffee soundtrack that shouldn't take much time to settle down. There may not be anything outstanding presented by Pritam in the album but there isn't anything bad enough to be rejected either. Every song works well within the space it arrives in the album (and expectedly in the film's narrative) and would ensure that the narrative of the film never gets stagnated. While 'Aila Re Aila' and 'Nana Chi Taang' should find immediate attention, 'Sajde' could do well in the long run.