Psoriasis is a skin disease, characterized by inflammatory reddish, sharply limited seats that may be of different sizes. These focal points covered by silvery-white scales. Most frequently involves the area of the scalp, elbows, knees and lower back. Besides the skin, are usually affected and damaged nails.

Sometimes the disease is so mild that people do not even know they have it, but on the other hand, some cases of psoriasis can affect very large areas of the body. Psoriasis is not contagious and not transmitted from person to person. 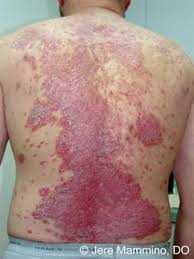 What causes the formation of psoriasis?

• The cause of the disease is unknown, but in 60-70% of cases in the immediate or wider family still someone has psoriasis, which leads to the conclusion that there is a connection between psoriasis and heritage, but it should be noted that the inherited tendency for the occurrence of psoriasis. • Last findings suggest abnormalities in the function of white blood cells, which trigger inflammatory skin reaction, which leads to a too fast decay and loss of skin cells (every 3-4 days). • Patients usually notice the new features of 10-14 days after the skin is cut, scratched, rubbed or burned by the sun. • Psoriasis can also be activated and some infections (streptococcal disease, upper respiratory tract and tonsillitis), and some medications.

• There are several forms of the disease. Differences in duration, location and shape and surface area involvement of psoriasis. • The most common form (psoriasis vulgaris) starts a small red formation in the skin, which gradually rise above the skin level, and on the surface they appear silvery-white scales. • Elbows, knees, groin and genitals, arms, legs, palms and soles, scalp and face, nails are the most common sites affected by psoriasis. Usually the changes are bilateral. • Nails affected by psoriasis at first appear to be impaled needle later thicken, become brittle, lifting off from the substrate and eventually fall out. • Children and adolescents most frequently affects psoriasis whose skin changes the size of the drops (psoriasis guttata), and usually occurs after a sore throat and pulls herself up after a while. • Up to 30% of people who are experiencing symptoms of psoriasis, arthritis, and 5-10% may have functional disorders (psoriasis arthropathica). • A special form of psoriasis (psoriasis pustulosa) is characterized by the appearance of bubbles filled with purulent material.

How to diagnose psoriasis?

Be sure to visit a dermatologist who will put a proper diagnosis based on a detailed examination, and will prove that it histological examination.

How is psoriasis treated?

• The aim is to reduce inflammation and control the damage to the skin. Treatment is determined by the patient's health status, age, lifestyle and the severity, or severity of psoriasis. • We distinguish between local and general therapy and phototherapy. • In local therapy applied keratolytics (usually salicylic acid), antipsoriatics, fluorinated glucocorticoids, kalcipotriol and vitamin A-acid. • In the general treatment used retinoids, immunosuppressants, and very rarely cancer drugs. • Topical corticosteroids and their combination with keratolytics (betamethasone-dipropionate and salicylic acid) are very effective in treating psoriasis.

You may be interested in reading Home Remedies for Psoriasis and Psoriasis Treatment.